“There is no superstition stronger in Ireland than a belief in the curative power of the sacred wells that are scattered over the country; fountains of health and healing which some saint had blessed, or by which some saint had dwelt in the far-off ancient times. But well-worship is even older than Christianity. It is part of the early ritual of humanity, brought from the Eastern lands by the first Aryan tribes who migrated westward, passing along from the Mediterranean to time Atlantic shores,” (Wilde, Holy Wells).

The great regard that the people of Ireland had for wells is so great that, at one time, they were referred to as The People of the Wells. Within Ireland and Wales, many sacred wells dotted the landscape, each coveted for their holy powers of magic, insight, and healing. From ancient times, to the spreading of Christianity into the British Isles, and even today, the cult of Sacred Wells still lingers. It holds a very profound and important meaning to the people of the Celtic lands (Bonwick, 239). It is often called Wilweorthunga, a term from Old English meaning, “literally – well worship. The worship of a well or fountain that is characterized by tying cloth to trees near them,” (Wordsense.eu).

Its important to discuss the cult of Sacred wells, especially when seeking to understand Celtic lore and the Fairy Faith, within three different contexts: Pre-Christian history and practice, Christian influence, and then finally the Sacred Well cult as it is today.

Source: Derek Voller “Ancient well in the grounds of The Weir Gardens”

Various Celtic folklore is littered with tales of wells, whether they be the main subject or not. There are the tales of the wells of Saints: The Well of St. Ludgvan, Pedws Ffowk and St. Elian’s Well, St. Seenan’s Well, St. Winifred’s Well, and so on. There are tales of the wells of fairies, connecting them to Fairyland and being places of great importance in the Fairy Faith: The Imp of the Well, The Weasel and the Well, The Bride’s Well, The Fairy Well, and so on. In the tale of The Horned Women, the main character is saved from the witches by the advice of a sacred well, “….she sat down by the well and wept. Then a voice came by her and said–“Take yellow clay and moss and bind them together and plaster the sieve so that it will hold.” This she did, and the sieve held the water for the cake. And the voice said again “Return, and when thou comest to the north angle of the house, cry aloud three times and say, ‘The mountain of the Fenian women and the sky over it is all on fire.” And she did so, (Wilde, The horned Women).

Stories told of wells that had spirits, which would offer protection and advice. They also told of fairies fiercely protecting their wells, “…They had wells, too, called fairy wells. All that paid a visit to such wells left something in them–a pin, a button. Such wells seem to have been different from those having a curative power, (Gregor, 59). But, what is the origin of the Sacred Well Cult?

“The Celtic tribes, starting from hot countries, where wells were always of the utmost value, still continued that reverence for them which had been handed down in their traditions.” This opinion may be controverted by ethnologists,” (Bonwick, 241). Some believe that the worship of sacred wells and fountains came from the south and east. When ancient tribes settled in the Celtic nations, they brought this belief with them; however, its still just a theory. The Sacred Well cult is very old, and most of the information has been lost to time due to most of the lore being oral vs written.  The practice holds ties with Druids, since many quoted that the Druids worshipped and honored the wells like gods. Some wells are believed to have gotten their power from the spirits of ancient Druids, the Druid magician Tregeagle is said still to haunt Dozmare Pool giving it power. Ancient Druids would gather to hold their rituals and ceremonies around wells for various reasons and purposes.

Like many of the Celtic practices, the practice of well worship blended easily with the introduction of Christianity. The old wells known and named after spirits, fairies, or Druids, were now named after Saints, and they were said to have received their power from the Saint instead. 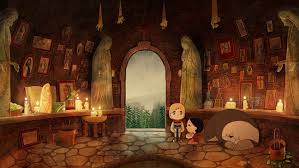 Source: Song of the Sea

However, the worship of worship of sacred wells was not a practice necessarily approved of by the Catholic church. Often the following phrases were used, “We teach that every priest shall extinguish heathendom, and forbid wilweorthunga (fountain worship), and licwiglunga (incantations of the dead), and hwata (omens), and galdra (magic), and man worship, and the abominations that men exercise in various sorts of witchcraft, and in frithspottum (peace-enclosures) with elms and other trees, and with stones, and with many phantoms,” (Anonymous, izquotes.com). It was still a popular and important practice within the daily lives of the peasantry of the British Isles. Such practices would include the following:

“It is the custom there, he states, for people suffering from any malady to dip a rag in the water, and to bathe the affected part of the body, the rag being then placed on a tree close to the well. When Mr. Davies passed that way, some three years previously, there were, he adds, hundreds of such shreds on the tree, some of which distinctly presented the appearance of having been very recently placed there,” (Rhys, chapter 5).

Even today, a form of well worship exists. Many will flip a coin into a well or fountain when making a wish or prayer. Its not exclusive to just the British Isles. However, it is more apparent in Ireland and Wales compared to other places in the world. The customs are still held in high regards. Such examples being: the tying of cloths to nearby trees and the act of washing clothing or oneself at the well, (Rhys, Chapter 5). 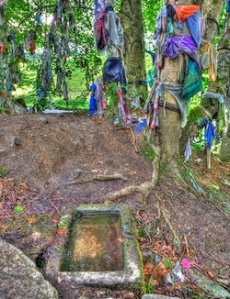 Though having only just touched the subject of the Sacred Well cult, I hope that this was informative and a helpful introduction. I do plan on writing more about this, specifically its ties to the Fairy Faith of the Celtic Nations.

6 thoughts on “The Cult of Sacred Wells: Introduction”